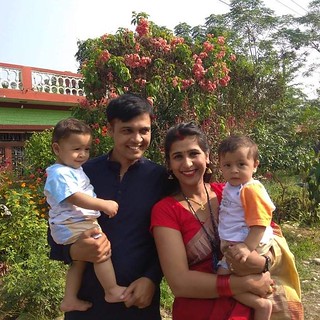 Saroj Ghimire founded PVN-Nepal in 2012 and currently serves as Director of the organization.  He currently lives in Kathmandu, with his  Twin sons with his wife Sara where he has over 10 years of experience managing volunteers from NGOs such as Real Gap, Original Volunteer UK, Travels to Teach Thailand and GoEco Israel.  Saroj’s interests include: working, traveling and social work especially with orphanage projects.  He has also volunteered and established programs in local communities served by PVN-Nepal.  You can contact Saroj at any time at 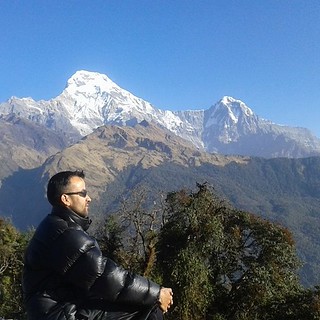 Yubaraj AKA PRINCE,
Program Coordinator, Language Director, Tour Export over the Himalaya
Prince is for the majority of teaching Nepali lessons during the training period in Kathmandu, He has over 7 years of experience teaching Nepali and Cultural information has worked with PVN-NEPAL since its inception before joining PVN Nepal, he worked with Saroj for 4 years, teaching the Nepali and Cultural Exchange. he finished his Bachelor degree in Education and Health is very helpful and supportive, participating tours, trekking, paragliding, Rafting all kind of Nepal Experience program we Coordinate he is also Government Licence holder Tour and Trekking Guide he enjoys interacting with International Volunteers. 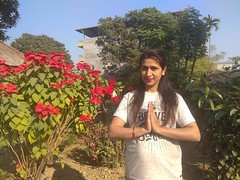 Sara is PVN’s program coordinator and has been working with volunteer organizations for over two years.  She has much experience teaching the Nepali language and local cultural traditions.  Sara manages volunteer placements and relationships and is responsible for coordinating our volunteers with placements due to current community needs and schedules their training programs. She matches each volunteer to a suitable project that will enhance their cultural education and provides accommodations for volunteers at their placement. Sara meets with volunteers and discusses with them which program would be the best fit for their given needs, previous experiences, and personality. You can contact Sara at any time at

Samir Adhikari
Lamjung coordinator
Samir is a coordinator, supports volunteers throughout their placement in Lamjung. Samir is also a computer engineer and takes our volunteers in Lamjung He is very friendly and open with good English.

Maarja   Helena was a volunteer with PVN in June 2015 for over 8 weeks. She was placed in  2 different places first Pokhara teaching at Street children orphanage &  Daunne Nawalparashi, Teaching at Buddhist nun monastery taught English for class 2 to 7. Maarja deeply observed  Hindu and Buddhist   Tradition & culture. She really enjoys time to teaching English and learns meditation in Daunne Monastery she enjoyed her time in Pokhara and Daunne. She also visits in Chitwan National park,

Karin worked with Saroj in April 2010 and she was placed in Pokhara Children Resource Centre at School.

After her volunteering time Karin stayed in 9 more months in Nepal, She knows lots about Nepal and Karin have traveled to many places in Nepal.

Nora worked with Saroj in April 2012 and she was placed in Pokhara Children Resource Centre at School.taught English for class 2 to 8. She deeply observed  Hindu and Buddhist  Tradition & culture and Nepalese lifestyle. She finished her Master in Buddhist Religion. She has visited Nepal  3 times after her Volunteering program.

Ravi came to Nepal in 2008 with Beautiful wife Nirmala and Cousin Shiva. They have volunteer 2 weeks in total with our organization. They have been in orphanage Work. They promise to Explore Himalayas Trekking next Time.

Anna came to Nepal in 2012. Anna has volunteer 4 weeks in total with our organization. she has been Volunteer work for Children Resource Centre in Chitwan. She Experienced  Nepal Himalaya Trekking with our Team.

Moritz joined PVN Nepal in March 2012. Moritz placement was in Pokhara and Chitwan where he Teaching at Monestry and Chitwan work in Orphanage! Moritz had a great time in Nepal.

Nicolas was Work with Saroj in March 2010. Nicolas placement was in Langtang where he opened a library! Nicolas had a great time in Langtang, discovering the beautiful sites and teaching the local children and School.


Mary works with Saroj from October 2010 until March 2011 for 2 months. She was placed in Langtan and Chitwan in school to teach English.

Kendrick worked with PVN in April 2014 for over 6 weeks. He was placed in Lamjung, He taught English in a School in Rupakot 6, Kendrick thoroughly enjoyed his time in Chitwan National park, hope to return back to work with us again.

Vadim was here for Research and Study for 6 months from his university to learn about Nepal Cultural Exchange program. like to work with PVN NEPAL as a French coordinator. In his Study, he was placed in Ktm, Chitwan Pokhara. He speaks Nepali as well

Fiona worked with Saroj in March 2009 for over 2 months. She was placed in Pokhara to work in an orphanage. She also taught English in a children resource center in Thulaket as well as in a Buddhist monastery in Lumbini. Fiona thoroughly enjoyed her time in Nepal and hopes to return to work with Saroj again.

Malcolm works with Saroj in 2009 and he likes to work with PVN NEPAL as a Scottish coordinator. He was placed in Kathmandu, Chitwan & Pokhara Malcolm Help various project, Malcolm Taught Monestry Kids for 2 weeks and 8 Weeks for School and 8 weeks for Pokhara Children Resource center to teach English

Piluka came in Nepal in 2013, she found Nepal is her second homeland. She was a volunteer with PVN  8 weeks. She was placed in   Pokhara teaching Teaching at Buddhist nun monastery taught English for class 2 to 7. She deeply observed  Hindu and Buddhist  Tradition & culture. She sponsors orphan kids.

Juan was a volunteer with PVN in June 2015 for over 4 weeks. He was placed in 2 different places first Chitwan teaching at School & Daunne Nawalparashi, Teaching at Buddhist nun monastery taught English for class 2 to 7.Juan deeply observed Hindu and Buddhist Tradition & culture.

All rights reserved with PVN-Nepal. Copyright © 2018
Powered by Apple Technologies